Finding a suitable executive sponsor for your HRMS project can be stressful as so much is riding on this decision. The right sponsor will provide guidance and open doors to help make your project a success. How do you know when you’ve found the correct person? Here are three characteristics shown by impactful executive sponsors that you cannot afford to miss.

1. An influential champion and leader

An executive sponsor needs to be many things to a number of people. A successful sponsor will convey the value of your HRMS project to the CEO and colleagues at the top of the house in finance, sales and technology. A sponsor has the ability to sell the business case and get the project budget approved, including headcount funding. The sponsor also will influence the HR team to support the project and to provide leadership through any HR change.

A sponsor needs to be inspiring so that HR resources will be committed to the project and willing to join the project team. Implementation is often a busy time of change when long time employees consider future state and outside opportunities. Your sponsor’s leadership of the project team is key to maintaining a stable environment and motivated group during and after the project.

An effective sponsor will see the big picture of how your HRMS project will contribute to achieving the company’s strategic goals and long term plans. An HRMS project isn’t just the nuts and bolts of ‘deliver self-service’ or ‘implement performance management.’ An HRMS is implemented to support the business’ strategic direction such as ‘to ensure market competitiveness through the development of effective talent’. The sponsor is the one who is able to convey and sell that vision within HR and throughout the organization.

3. A detailed control point who trusts others

A project manager has day-to-day accountability that tasks are being completed according to the HRMS project plan. An executive sponsor needs to have a comfort level at 30,000 feet to trust that the project manager and team are working hard to deliver to plan. The sponsor must be able to dive into the details when needed and to understand the finer nuances, especially if something is going wrong and more funding or resources are needed. Ultimately the sponsor is the one who is signing off on the milestones and budgets. As the final sign-off point the executive sponsor is committed to the long-term health and success of the project. 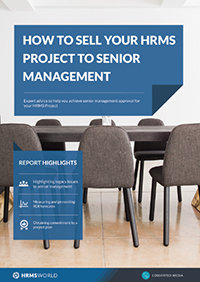 How to sell your HRMS project to senior management