With all the hype about HRMS Manager Self-Service (MSS) and the need to automate an increasing number of HR transactions, is this functionality now an essential requirement for an HRMS? Is there any reason not to automate? As I recently learned in a chat with a small company, HRMS manager self-service is not always what it is cracked up to be. In particular, we need to be cautious of how we define our self-service processes. A cautionary tale follows.

...a small pharmaceutical firm was aware through employee and manager surveys that it was lagging behind expectations with regards to their HRMS system. While there was some data visibility available through direct reports, managers were not happy with the need to search for .pdf forms on the portal to be printed, filled in, and then emailed to an HR contact in order to conduct basic employee transactions. Manager self-service became the top priority for the HRMS team to deliver in the following year.

The team identified five top volume transactions, including hire and termination. Hire was deemed as too complex due to the number of fields and knowledge needed about the data. Termination was declared as relevant, but caution was advised in the event that a manager had not done the appropriate due diligence with an HR partner, there was also some nervousness that payroll or system access would be impacted by an incorrectly submitted termination. Other transactions fell into a similar state—the manager was not educated enough in the data or processes to be allowed to enter the data through HRMS self-service; instead, the manager’s data entry would enter a holding pen for HR partner to review and approval.

As imagined, the HR partners were not pleased with this arrangement, as often the manager was submitting such incorrect data, that it would be easier if a manager had just gone to HR in the first place. In particular, managers were not clear on the department structure, or the impact of certain data changes, such as a location change requiring further review by payroll. As the HRMS team had designed these processes, they also had to provide an educated resource to review and approve most transactions and filter out the specialized ones requiring HR partner input.

Managers were actually more disgruntled after the HRMS manager self-service implementation as transactions went into a black hole without an idea of when the data would actually appear in the system, which often wasn’t the submitted data anyway. The end result was declared a failure.

MSS requires educated and empowered managers and efficiency in process design. If your organization isn’t ready to commit to these, it would be better to avoid HRMS manager self-service until such time as you’re ready to commit. 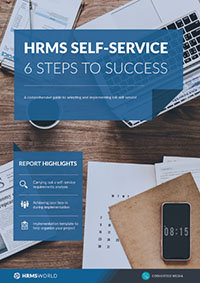 HRMS Self Service - 6 Steps to Success

Your comprehensive guide to selecting and implementing HRMS self-service