Three signs your HRMS implementation is heading for failure

Sometimes you can see the train coming off the tracks. As you proceed with your HRMS implementation, certain signs may make themselves known that, if you only pay attention, will tell you that something is awry.

But all is not lost.

These signs are simply indicators that you must take some remedial action to get the project back on course. Here are three clues  that all is not well in HRMS land…

1. Key stakeholders are not playing ball

Certain stakeholders (often the more senior ones) can be highly influential in relation to your project’s success. That influence is not always leveraged as you might like. Perhaps they’re not providing information on time, or they’re raising awkward questions, badmouthing the project on the quiet, or they just clearly do not understand the key principles or fundamentals…

However much support you think carry with other senior stakeholders, don’t ignore them. Instead engage (or re/engage). Use the issue (their behaviour or lack of necessary action) as an entry point into a conversation about the rationale behind the system, the expected business benefits, and – most importantly – what’s in it for them and their team(s); how will  they benefit?

Of course, the final fall-back position is that the project has been signed off at the top level and it must be done. But far better to persuade with honey than force them to drink the vinegar!

2.Technical problems are showing up late in the process

In your final testing, approaching the go-live date, or maybe during the user training, the system  isn’t working as it should. Warning bells should be ringing, indicating that perhaps the technical side of the project has been skimped on. It might be a case of poor data cleansing and migration, insufficient testing or parallel running with legacy systems, hardware issues and compatibility, integration with other business systems, etc.

Get together with your technical team (including, if relevant, your external HRMS consultant) and track down the difficulty, identify the cause, and then fix it even if it delays the whole project.

Consider setting up a team of beta users from your various stakeholder groups, if you haven’t already, and engage their help in searching out glitches and bugs. Whatever you need to do to fix it, do it. A system that functions at only 50% effectiveness on go-live day has  not gone live!

3.Trained users don’t know how to use the system

Of course you don’t expect people to be masters of HR technology after a single HRMS training session, but if you’re seeing common errors or misunderstandings then it may be a sign that the training is not focused on the right areas. Hopefully, your training evaluation process  will show  this up but let’s face it, that can sometimes be skipped in the rush to getting the system up and running.

Slow down, do some testing of people’s ability to carry out certain key tasks (using the manual/cheat sheets/training notes is fine) and identify the problem. Maybe you were just too ambitious in how quickly people would acquire competence in the new system; you wouldn’t be the first.

But just as with the technical problems above, a live system that people don’t know how to use isn’t really live in any pragmatic sense. Take it slower if you need to and ensure that users’ skills and knowledge are built up to the required level. 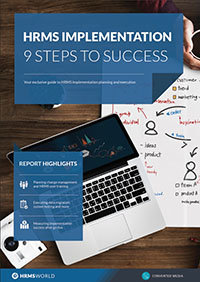