Cloud and SaaS HRMS solutions are often chosen for financial reasons as their low upfront costs provide the cornerstone for a winning business case. Many companies are later surprised when the total cost of ownership exceeds their original assessments. What follows is a guide to calculating the true cost of your new cloud HRMS, including some typical areas that are often missing from cloud HRMS TCO estimates.

Know the difference between cloud HRMS and on-premises HRMS TCO

The biggest fundamental difference between the costs of cloud and on-premise HRMS is the pricing models they typically follow.

Cloud HRMS is usually sold on a subscription model, whereby a regular payment (usually monthly) is made to the vendor to effectively ‘rent’ the HRMS. The subscription is calculated based on either the number of system users or the number of employees in your organization. On-premise systems often use the more traditional ‘licence’ model which, in practice, is more of a you-buy-it-you-own-it model.

Subscription is popular because it spreads the cost, is flexible, and can usually be canceled at any time. For this reason, it’s particularly sought-after by small to medium-sized businesses who may not be able to afford a high initial outlay. The subscription model also avoids customization costs (your options to customize are usually limited) and installation is cheaper because there is no server to buy or maintain.

That said, licensing an on-premise HRMS does give you more control over the system: in terms of hardware, installation, customization, updates, etc. It may often be more work to keep up to date but it’s yours! Cloud HRMS fans are happy to sacrifice a little ownership for ease of use at a reasonable cost.

The final factor may well be the expected lifespan of your new system. Licensed on-premise systems may cost more initially, but you’re paying a subscription every month without fail. At some point, the cost of the subscriptions will exceed the license. If you can’t decide between two systems with different pricing models, it’s worth calculating the point in the future when one cost overtakes the other and then think about how long you need the HRMS to serve.

When your decision is veering towards a cloud HRMS, it’s wise to check the details of the offered contract for any hidden costs. How flexible is the contract? In the past, on-premise HRMS allowed you to purchase and install an application and then you could do what you liked as they had no visibility into how the application was used. Cloud solutions are more of a big brother atmosphere as vendors are hosting your database.

Some companies use the contract to lock in a multi-year cloud contract to get the best rates, but then struggle as their HRMS cannot meet the changing needs of the business. Take the example of a large multinational licensing a cloud HRMS for three years for a population of over 100k employees. The business decides to spin off half of the company in a divestiture. The HRMS contract is priced based on headcount, so even though the company can ramp down their counts, the cost per employee for a lower population is higher as the volume discount is lost.

Upgrades are an expected activity in the HRMS world but cloud updates are more frequent, with the benefit that the software is up to date on legislation and vendors can react quickly to enhancement requests. A downside of multiple upgrades in a year is the amount of time and effort that needs to be devoted to testing each upgrade. Many companies have outsourced to providers of other systems such as payroll, talent management applications or compliance software. Often, these applications will charge an additional fee for producing and uploading test files. They may also charge additional payments for changes to your interface files or data structures. These modifications and costs are frequently unknown in the early days of signing a contract and only become visible once you’re into the upgrade cycle.

All HRMS implementations involve user training. However, when it comes to looking ahead to the future training needed to support system updates, the cost may be larger than you think. As already mentioned, cloud systems are generally updated more often (because they can be) and it’s easy to underestimate the time and energy needed to review and amend the training materials for every update.

Support documentation such as course content, user handbooks and manager and employee quick guides are a necessary part of implementation. Most companies include the creation of training documentation and materials as a part of their business case and the budget is spent to get everyone trained and ready for the rollout.

The surprise comes later as most companies are not prepared for the amount of time and effort that it takes to review these materials each time there is an upgrade. For example, a cloud system modifies its pages with a more streamlined design, including moving the employee photo from the center of the screen to the left, and rearranging menus. Their HR call center then experiences an increase in call volume from employees and managers as the instructions on how to carry out transactions are out of date. New core users are also confused, and the recorded webinars on how to perform various HR processes do not reflect the current system.

While cloud systems are often intuitive and require less training, the regularity of upgrades can cause a lot of downstream work to modify your user guides, course content, and instructional materials which are further compounded in costs if you rely on third-party consultants to provide learning materials. As many cloud HRMS release new updates two or three times a year, these costs can quickly add up.

Alongside the above issues, in the past the TCO of cloud HRMS has shown some other unique, ‘hidden’ costs, including:

To end on a positive note, another factor often cited is a difference in the financial classification of cloud and on-premises systems. Cloud systems can be viewed as rented rather than bought, due to the regular subscription payments, and are seen as operational expenses. On-premises HRMS however, with a license, are classified as capital. This is a significant difference when it comes to budget management and can make all the difference sometimes. 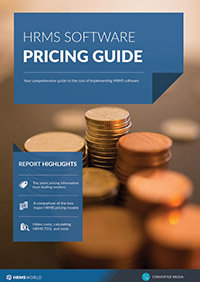 Get your comprehensive guide to the cost of HRMS software.