In a way, this step in your HRMS ROI exercise is deceptively simple. You have a cost figure, you have a return figure. Those two figures may be subdivided into several specific metrics or they may be expressed as a single “money spent – money saved” statement but either way, they’ll tell you whether you spent more than you saved.

But this is just the overarching ‘did-we-win-or-did-we-lose’ headline. Naturally, there are some ‘drilling down’ questions that follow an HRMS ROI analysis and the first is:

If We Won, Did We Win by Enough to Have Made the Time, Money and Effort Worthwhile?

After all, you weren’t hoping to save a few pennies; the introduction of a new HRMS should ideally facilitate a quantum leap in HR efficiency and performance.

If We Lost, What Went Wrong?

If the hoped-for savings and efficiencies did not transpire then this is the time to learn from the experience. Maybe the expectations were unrealistic, maybe the wrong software was selected, maybe mistakes were made at the implementation stage… the odds are, all is not lost. If you can analyse what went wrong then the system or your use of it (or perhaps simply how it was introduced to the organisation and workforce) can be recalibrated and the target savings can be made in the future.

Whether We Won or Lost, Now What?

As in any evaluation exercise, the examination is of the past, but the focus is on the future. The big question is always, what next? Plan the period of use for your HRMS. Do you make further improvements, buy or activate further modules and functionality? What steps need to be taken to address any elements that did not perform to expectations? What is the perception of the HRMS amongst stakeholders (users, HR staff, c-suite, even customers) and how can that perception be improved and/or capitalised on?

With the stakeholders in mind, remember that whatever your initial reasons were for purchasing a new HRMS, it was a significant investment, but so is the ROI exercise itself. You’re not only assessing the performance of the software and technology, but you also need to consider how you communicate the results of that assessment to the organisation. Often, even an initially disappointing HRMS ROI analysis can be turned around through better user engagement.

Recommended Reading: How to calculate your HRMS ROI in 5 simple steps

Finally, take some time to evaluate the ROI process you’ve just undertaken. Given that an HRMS should have a life cycle measured in years, consider the next ROI exercise. On reflection, were the chosen metrics and measures the right ones? What metrics and targets should you be measuring for the next 12 months? Bear in mind, that if you change the metrics too much during your HRMS ROI analysis, you won’t be able to convincingly benchmark against the results of the first exercise; on the other hand, if the metrics really weren’t right, the sooner you abandon them, the better. 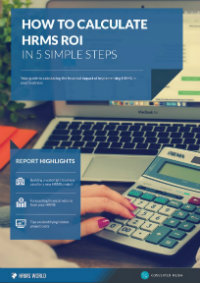 How to calculate HRMS ROI in 5 simple steps